The Music- Music to Soothe the Savage Beast

Music to Soothe the Savage Beast
By Aliana Boone 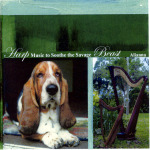 Aliana Boone, a harpist, said, “The structure of the harp is considered to be the most healing instruments next to the human voice.” Boone plays for family pets that are sick and produced a CD “Harp Music to Soothe the Savage Beast.”

[Three groups of 32 canine patients received 60 minute sessions of harp therapy (Group 1: hospitalized less than 8 hrs.; Group 2: hospitalized longer than 8 hrs.; and Group 3: post-surgical patients). Visual measures of discomfort: restlessness, anxiety and respiration; all decreased during the harp therapy session. The control group displayed no such increase and, in fact, continued to increase in all three measures. The harp therapy group demonstrated a gradual decline in respiration rates over the on-hour in contrast to the control group – which remained unchanged during the same period. Both groups demonstrated a shallow trend in reduction of heart rate. ] Read More